Compare the Pair #17 | The Tale of Two Fridges 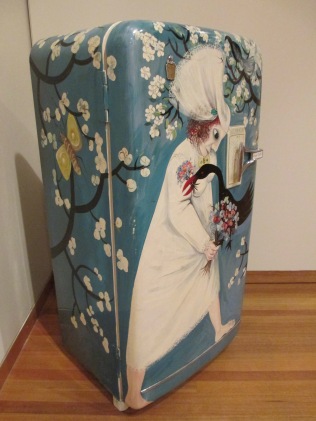 Above: Left: Leda and the Swan fridge by Arthur Boyd; Above Right: Decorated fridge by Shirley Stewart at  ANA Hall, Harcourt, Victoria.

In 1958, 11 Australian artists were invited by The Australian Women’s Weekly and Kelvinator to paint the surface of a fridge as if it were a canvas. One of these artists was respected Australian artist Arthur Boyd, who was known for his involvement in pioneering movements such as the Angry Penguins and the Antipodeans. Each artist was provided with a Kelvinator Magic Cycle refrigerator on which they painted.

Boyd’s painting, Leda and the Swan was inspired by the Greek mythological tale in which the god Zeus, in the form of a swan; seduces Leda. According to later Greek mythology, Leda bore Helen and Polydeuces, children of Zeus[ while at the same time bearing Castor and Clytemnestra[ children of her husband Tyndareus, the King of Sparta.

The other fridge was painted by Shirley Stewart, in the 1990s (from a photo), but unlike Boyd’s, it is still a working Pope (brand) fridge. It can be seen at the ANA Hall in Harcourt, where Devonshire tea is served every year at the annual Harcourt Apple Festival. (To be held on 10 March, 2018) or any Wednesday during the year, when the Historical Society is open.

Unlike the Leda and the Swan fridge, you will see bottles of chilled milk ready to be served with your Devonshire tea; unlike the Boyd fridge at the Bendigo Art Gallery, which sets of an alarm if you are curious and want to open its fridge door.