Don’t be a bunny… this might be the one-y!

Posted on October 3, 2015 by maryannadair 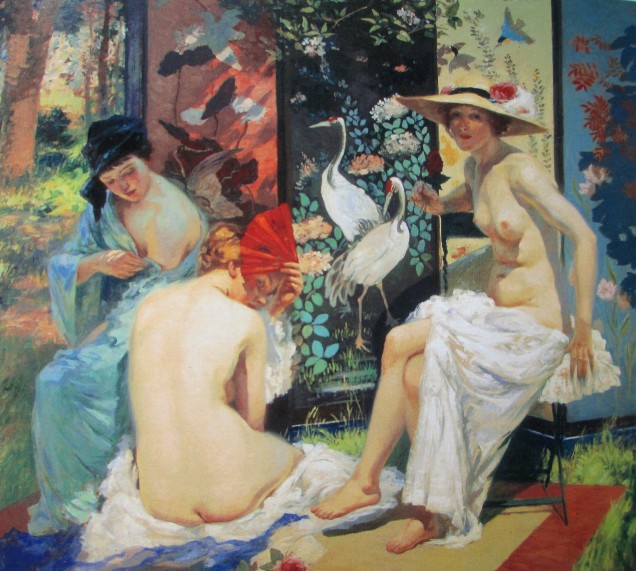 Featured above is “The Sunbath,” (1913) oil on canvas by Australian artist Rupert Charles Wulsten Bunny; who was born on the 29th September 1864.

Rupert Bunny achieved success and critical acclaim as an expatriate in fin-de-siècle in Paris and received an honorable mention at the Paris Salon in 1890 with his painting Tritons. Around 1895, Bunny met his wife Jeanne Heloise Morel who became his principal model, but they did not marry until 1902. Bunny continued to live in France and Australia, travelling between the two countries frequently until 1933 when Jeanne died. It was then that he decided to return permanently to Australia, where he settled in the Melbournian suburb of  South Yarra, not far from the bayside suburb of St. Kilda, where he was born; and remained in South Yarra for the next 14 years until his death on 25th May, 1947.

Image on the right is: Endormies (ca.1904) Oil on canvas (130.6 x 200.5cm). Many of his works from this era include a red rose; an ancient symbol of love, beauty and sensuous power; which is also considered to be the symbol of the recurring motif of Belle Epoque culture. Bunny was a bronze medal recipient at the Paris Exposition Universelle, (1900) for his Burial of St. Catherine of Alexandria.  Over the years, France acquired 13 of his works for the Musée du Luxembourg and other regional collections.

I adore his work, and if I had the opportunity – I would put my money on the Bunny!