The Glorio of Loureiro | In the Springtime of His New Moon 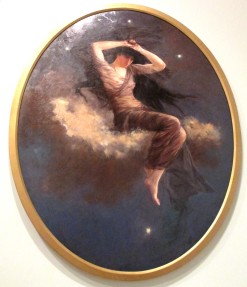 Portuguese painter, Artur José de Sousa Loureiro was born on 11 February 1853, in Porto, Portugal. Lourerio attended the Escola Superior de Belas-Artes do Porto, where he studied under João António Correia. In 1875, he went to Rome with the support of his patron Delfim Guedes (1842-1895), the future Count of Almedina. In 1879, he moved to Paris with a scholarship to study at the École des Beaux Arts; living in the Latin Quarter and obtaining a position in the studios of Alexandre Cabanel.

Loureiro exhibited at the Salon from 1880 to 1882, along with his fellow painters from Portugal. While in France, he met Marie Huybers (the sister of novelist Jessie Couvreur) and married her, even though marriage violated the terms of his scholarship.

Loureiro sought another scholarship, but illness prevented him from submitting an entry. He then moved to London, where his exhibits attracted attention, but his health required a warmer climate. By 1884, both he and Marie emigrated to Australia, settling in Melbourne. The following year, Loureiro joined the first Australian Art Association, which merged with the Victorian Artists Society in 1888.

A few months before his death on 7 July 1932, in Terras de Bouro, Loureiro was awarded the Order of Saint James of the Sword. He died suddenly while on a landscape painting sojourn in the countryside.

Loureiro | In the Springtime of His New Moon