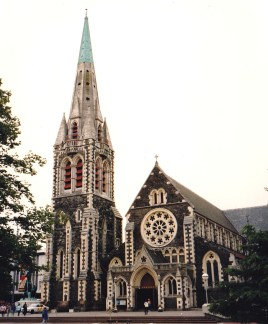 In 2014, Ban was named the 37th recipient of the Pritzker Architecture Prize, the most prestigious prize in modern architecture for his innovative use of material and his dedication to humanitarian efforts around the world; calling him “a committed teacher who is not only a role model for younger generations, but also an inspiration.”

The site, on the corner of Hereford and Madras Streets in Latimer Square, is several blocks from the permanent location of Christchurch Cathedral, (see above) which was significantly damaged in the 2011 Christchurch earthquake. Following the earthquakes, Shigeru Ban was invited to Christchurch by Rev. Craig Dixon, the Cathedral’s marketing and development manager, to discuss a temporary cathedral that could also host concerts and civic events. The concept was developed during that visit.

Ban designed the building in collaboration with local architects Warren and Mahoney. Initially it was hoped to have the cathedral open in February 2012 for the first earthquake anniversary. However, it was not until April 2012 that the site was blessed, and construction began on 24 July 2012. The building opened to the public on 6 August 2013 with a dedication service on 15 August. It was the first significant building opened as part of Christchurch’s rebuild.