May Your Cup Runneth Over and Be Squashed 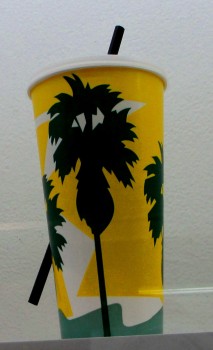 MC states: “I am repulsed by the amount of ephemeral consumerist ‘stuff’ we throw out in our daily lives. I am also attracted to the design work that often adorns this stuff. I wanted to see how many paper cups I could collect for free, off the streets, and out of rubbish bins without ever buying a cup myself, or going out of my way to look for them. I also restrict my collecting to not picking up cups with the same design twice; although I do allow colour and design variations within the same brand.”

The humble paper cup, often made from recycled paper and sometimes lined or coated with plastic or wax were developed in the 20th century and became more popular after the invention of the Dixie Cup in 1908. They soon replaced drinking glasses on railway journeys and were considered more hygienic than the former glass variety. They were then adopted by public hospitals. Originally paper cups were printed using rubber blocks mounted on cylinders with a different cylinder for each colour. Until flexography plates were which allowed for more complex designs. Shorter runs can be produced on offset printing machines and although formerly used solvent based inks they now use soya-based inks to reduce the danger o cups smelling. The latest development is Direct-printing which allows printing on very small quantities, offering small quantities in short lead times.

There are many opinions in relation to their continued use and environmental and sustainability issues from habitat-loss trees, recycling techniques, biodegradability and emission studies and the general paper vs. plastic debate.

This entry was posted in Collectibles, QuestionableArt, RubbishArt. Bookmark the permalink.