The Fate of the Owl My Dear is Ever So Clear to Hear, Due to the Verse and Cheer My Love, From the One and Only Edward Lear

Posted on November 3, 2017 by maryannadair 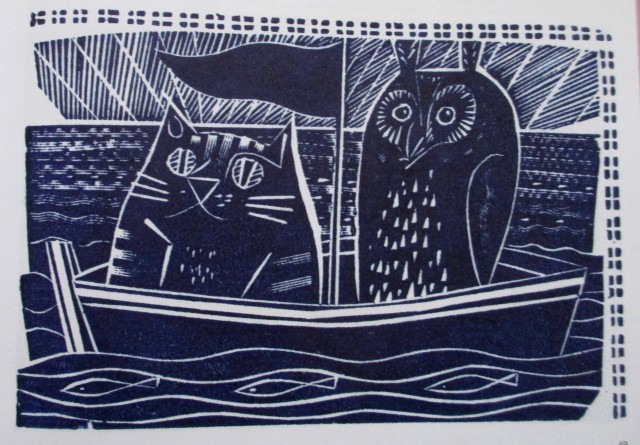 About the artist:
Scottish wood engraver, illustrator and art lecturer Jonathan Peter Gibbs began his career by first studying painting and art from 1973 – 1978 at the Lowestoft School of Art, then at the Central School of Art & Design, (London) and finally at the Slade School of Fine Art at UCL.

Gibbs’ artwork involves drawing, painting, illustration, print-making and wood engraving. His main interest in wood engraving began during his studies in London at the Central School of Art & Design and he began engraving around 1982-83. Prior to this he had been making scratched drawings onto heavily chalked paper when he discovered that carving into wood surfaces was similar in technique.  His works in oil are made on wood panels primed with gesso and he makes wood-blocks from boxwood and holly blocks to engrave images which are then sometimes printed onto Japanese paper by hand-burnishing with a bone spoon. He often produces monochromatic works using charcoal, graphite, paper linen or canvas, black and white with occasional use of red, blue or grey colouring.

His work has been published in a variety of books, magazines and printed artifacts as well as in digital formats and web design. As an illustrator, he has worked for Hamish Hamilton, Faber & Faber and Routledge Publishing. He has also conducted illustration work for Prada.

Gibbs has presented 11 solo exhibitions in London and Edinburgh since his first in 1987. His most recent ‘Life is but a dream‘ was held at the Open Eye Gallery, where he presented over 40 new works including wood engravings, pencil drawings and oil paintings. Gibbs is renowned for his 15 feet decommissioned diving-board which features one of his woodcut prints.