Sometimes – Time and Tide Wait For No Man 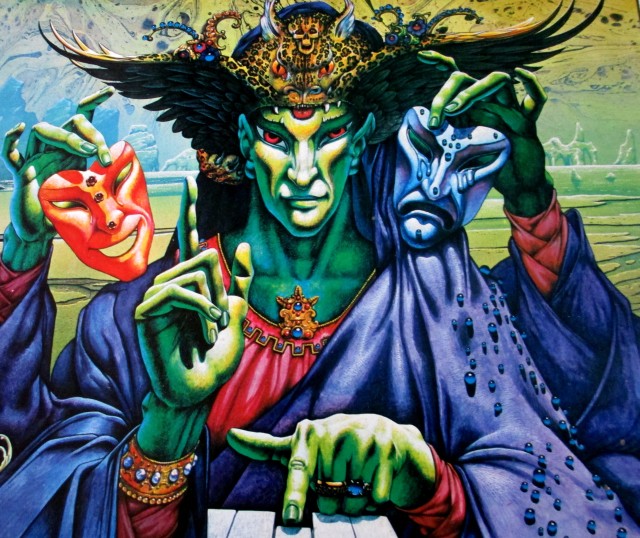 Above: Patrick Woodroffe’s LP cover design for Greenslade’s  “Time & Tide for No Man”.

Patrick James Woodroffe was born on 27 October 1940, in Halifax, West Yorkshire.  He became a full-time artist in 1972; the year in which he gave an exhibition of his paintings, etchings and related works at the Convent Garden Gallery, in London.

In 1979, Woodroffe provided illustrations for Pentateuch of the Cosmogony: The Birth and Death of a World, (later shortened to ‘The Pentateuch’), a joint project with the symphonic rock musician Dave Greenslade.

The Pentateuch purports to be the first five chapters of an alien Book of Genesis. The album consisted of two-discs by the band Greenslade, and a 47-page book of Woodroffe’s illustrations. The record sold over 50,000 copies between 1979 and 1984. The illustrations were shown at the World Science Fiction Convention, at Brighton’s Metropole Hotel in 1979.

Woodroffe lived with his family in Cornwall until his death, after succumbing to a long illness, on 10 May, 2014.