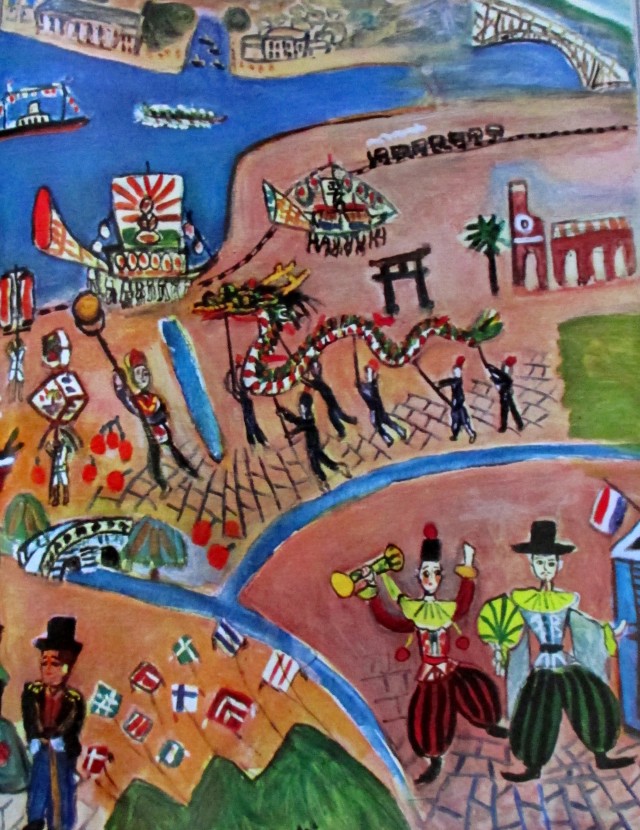 The image featured above  is entitled: “Portrait of a City,”  an oil painting by Shintaro Suzuki.

Shintaro Suzuki was born in Hachioji, Tokyo in 1895.  He studied oil painting under Seiki Kuroda, who was one of the pioneers of western-style painting in Japan. In 1936 he joined the well-known Nikakai Group.

“Portrait of a City” depicts the Mitsubishi Dockyard* with a Dutch ship and the Chinese-style pei-long regatta taking place off Dejima, the former foreign settlement and the far right is Saikai Bridge and just below that are the ruins of the Urakami Church. (Dejima is a small fan-shaped artificial island built in the bay of Nagasaki in 1634 by local merchants).

*The name Mitsubishi translates as: “mitsu” meaning “three” and “hishi” (which becomes “bishi” under rendaku) meaning “water chestnut”, which is reflected in the company’s logo.