Tambourines and elephants are playing in the band 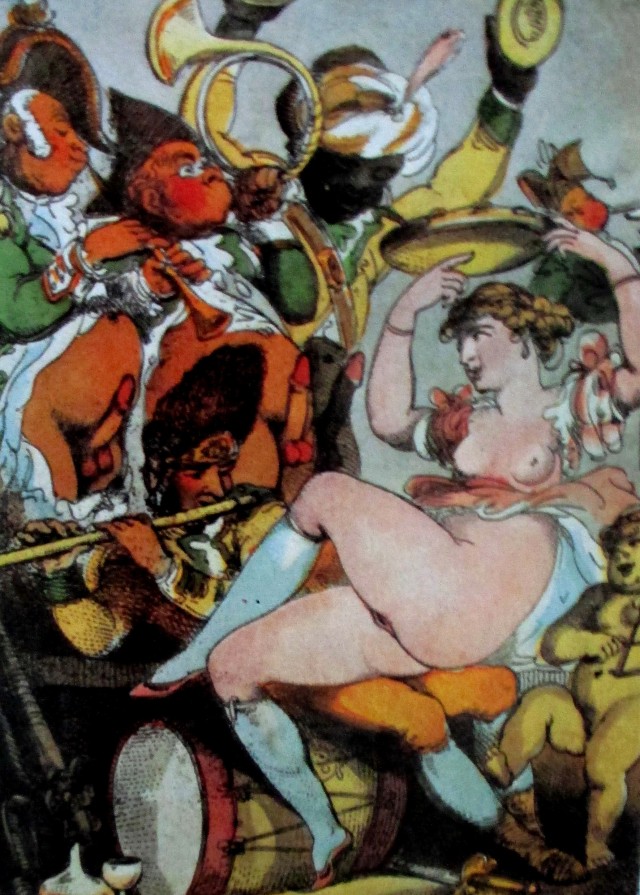 Believe it or not, there is a tambourine featured within this image. (see left). Can you detect who is holding it? Regardless of whether you notice it or not this illustration by Thomas Rowlandson is entitled:  “The Tambourine“.  Rowlandson, an English artist and caricaturist, was born on 3rd July, 1756 in Old Jewry, London. Three years after his birth, his family moved to Richmond, North Yorkshire and despite the family’s move to Yorkshire, Rowlandson returned to study in London, as a pupil of Dr. Barvis, at the Soho Academy.   From his early school days, Rowlandson drew humorous characters of  both his masters and many of his fellow scholars indicating his desire and passion for caricature.  After leaving school in 1772, he became a student at the Royal Academy and also went to Paris where he spent two years studying in a drawing academy studying “the human figure” and continued developing his youthful skills in caricature.

Rowlandson’s designs were usually done in outline with the reed-pen, which was delicately washed with colour. They were then often etched on copper by a professional engraver, with the impressions being coloured in by hand afterwards.

“Tambourines and elephants are playing in the band
Won’t you take a ride on the flyin’ spoon?
Doo, doo doo
Wond’rous apparition provided by magician,
Doo doo doo lookin’ out my back door”