Modern photography must do more than entertain… 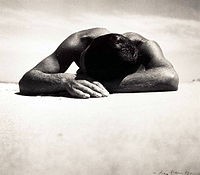 … so said Max Dupain… and he continued:  “It must incite thought and by its clear statements of actuality, cultivate a sympathetic understanding of men and women and the life they live and create.”

Australian modernist photographer, Max or Maxwell Spencer Dupain, was born on the 4th April, 1911.  He began his career after joining the Photographic Society of NSW, where he was taught by Justin Newlan. After completing his tertiary studies, he worked for Cecil Bostock in Sydney.

By 1934, Dupain opened his first studio in Bond Street, Sydney. Three year later, he photographed his friend, Harold Salvage, on Culburra Beach in NSW; and it was this image which would make him famous. Entitled “Sunbaker“, it was purchased by the National Gallery of Australia in Canberra in 1976.

Dupain loved architecture and pursued its form in his photography. He married twice. Once to a photographer in 1939 after the outbreak of WW2; and around 10 years later to Diana Illingworth; to whom they had two children.  Max Dupain died on 27th July 1992.

The above image is entitled “Dolls Head and Goats Skull“.  (ca 1937). Gelatin silver photograph purchased with the assistance of James Agapitos OAM and Ray Wilson, OAM, (2007), National Gallery of Australia, in Canberra.