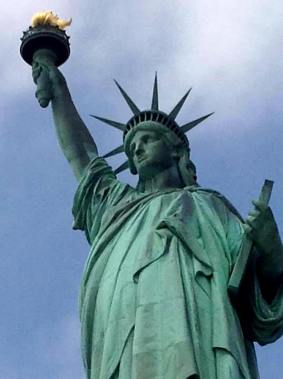 On October 28, 1886, in New York Harbour, US President Grover Cleveland, dedicated the Statue of Liberty, a gift from France to commemorate the centennial of the “Reclamation of Independence”,  (aka “Liberty Enlightening the World“) . – The statue is located on Liberty Island, near Manhattan and designed by French sculptor, Frederic Auguste Bartholdi.

A one-fourth scaled replica was given to the French in 1889 by the American ex-pat Community in Paris to the city of Paris and stands on a small artificial island on the Seine’s  Il aux Cygnes (isle of the Swans) which faced East until 1937 ,when it was decided it should face west towards its ‘big sister’  – doubly that ensures that “Liberty enlightens the world” – I’ll hold a torch to that flame!

Ergo, if the first photo looks larger, it must be from the original concept, but then again, maybe the ‘alternative’ smaller version is the ‘real-macCoy’ – you be the judge!

This entry was posted in StreetArt and tagged monuments, Statue of Liberty. Bookmark the permalink.