The Cheesestick the Ribcage and the Condom

Posted on January 5, 2013 by maryannadair

From this header, the mind boggles. Sounds like a wild drunken night involving meat, cheese and sex. If that is what you think – you’re wrong. What we are looking at is street furniture or sculpture. All apologies if you were thinking you were going to see something else.

The Cheese-stick, the ribs and the Condom – As visitors travel along the main motorway from the Melbourne International Airport heading into the CBD, they’re confronted by a 70-metre yellow steel beam cantilevered  at a precarious angle across 8 lanes of freeway traffic and an assemblage of thirty-nine 30-metre high red sticks. Officially these are named the ‘Melbourne International Gateway’, but the locals have taken to calling these:

The Ribcage and The Cheese-stick. The “Cheese-stick” (cantilevered pole) purportedly represents the Victorian Gold-Rush (why? because it’s yellow?) and the Ribcage represents the Wheat Industry of Australia (What part of wheat is red – go figure, I can’t see it – surely there’s no blood money involved). 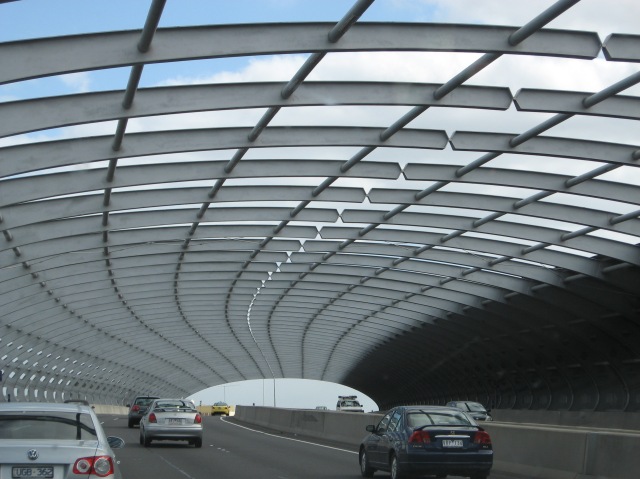 Travelling a little further on towards the city, there is a huge semi-transparent tube built over the freeway, which was designed to reduce noise pollution to nearby housing.  The local community have  nicknamed, this as “Jeff’s condom” after Jeff Kennett, a former State Premier who was responsible for the inception of these sculptures and his name has been attached to this humongous sheath since it has been built.

For those who are seriously interested, the designers were Denton Corker Marshall and these were completed  in 1999.

These represent art in the street furniture/sculpture area, to which there are many examples.

2 Responses to The Cheesestick the Ribcage and the Condom