Like A Bridge Over Ponded Waters, I Will Lily You Down

Posted on December 1, 2018 by maryannadair 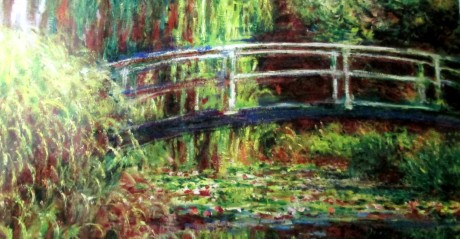 Born Oscar-Claude Monet in France, on 14 November 1840, Monet was a founder of the French Impressionist school of painting.

As a consequence, Monet’s lily ponds and bridge at his Giverney home, have become an iconic impressionistic artwork which other students, artists and copyists wish to perfect. Images include:

Regardless of copies, parodies or originals it is evident that when it comes to Giverney’s waterlilies, there are Monet Bridges to Cross.