Grainger’s Toweling Fashion Changer – Has a Dry Sense of Humour 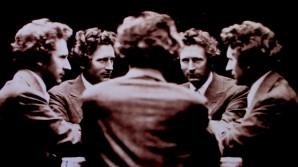 About these clothes, Grainger once commented: “Around 1910 my mother mooted the idea of clothes made of Turkish towels, ‘cool in summer, warm in the winter and washable at all times’. I leaped at the idea, seeing therein a chance to return to something comparable with the garish brilliance of the ‘skyblue and scarlet’ garments of the Saxon and Scandinavian forefathers. In the 1930s, he and his wife Ella Strom took up this idea of toweling clothing.

Percy Aldridge Grainger (8 July 1882 – 20 February 1961) was an Australian-born composer, arranger and pianist, responsible for the revival of interest in British folk music in the early years of the 20th century, such as the popular  folk-dance tune “English Country Gardens“. He was born in a house in New Street, Brighton and home-schooled by his mother Rose. Grainger left Australia at the age of 13 to attend the Hoch Conservatory in Frankfurt. Between 1901 and 1914 he was based in London, where he established himself first as a society pianist and later as a concert performer, composer and collector of original folk melodies. Grainger then moved to the United States where he lived for the rest of his life, although he traveled widely in Europe and in Australia. After his mother’s suicide in 1922 he became increasingly involved in educational work.

In October 1953 Grainger was operated on for abdominal cancer. In September 1955, he made his final visit to Australia, where he spent nine months organising and arranging exhibits for the Museum. Before leaving Melbourne, he deposited in a bank a parcel that contained an essay and photographs related to his sex life, not to be opened until 10 years after his death.

Grainger died in the White Plains hospital on 20 February 1961, at the age of 78. His body was flown to Adelaide where, on 2 March, he was buried in the Aldridge family vault in the West Terrace Cemetery, alongside his mother, Rose’s ashes. Ella later married a young archivist, Stewart Manville. She died in 1972, aged 83.