Hunter: For the Record – We was Rob’d 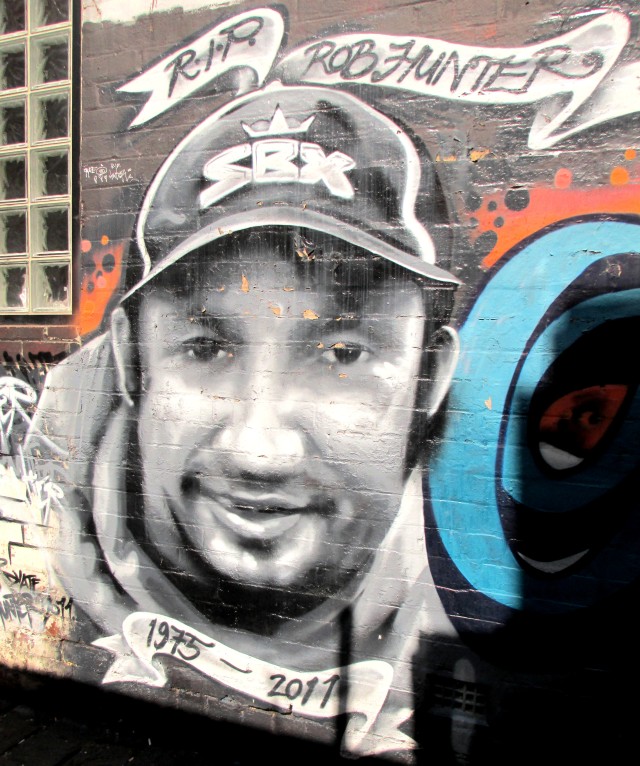 October 20, 2015 marks the fourth anniversary of the death of Rob Hunter from the legendary MC collective Syllabolix or SBX Crew. Known as Hunter or Huntz, he was an Australian MC rapper and hip hop artist known for writing raps about his home and life around Perth in Western Australia (W.A.).

Robert Alan Hunter  was born on October 1, 1975, in the Perth suburb of Yokine.

As part of the SBX Crew, Hunter released a total of four albums:

On hearing his diagnosis with terminal neuroendocrine cancer in November, 2009, Hunter wrote: “I was diagnosed with cancer. Neuroendocrine tumours on the pancreas with metastasis to liver… I was devo’d of course as this is pretty much a death sentence.”

When members of the Australian hip hop community found out, they banded together to raise money for the MC and ultimately for his young son Marley and his partner, Laura. In November 2010, a charity eBay auction was organised by fellow MCs, Bias B and Len One called Heat 4 Huntz to raise money to help Hunter and his son. The one week eBay auction raised more than $11,000 through donation and sales of rare local releases, signed merchandise and records.

In August,2011, two months before his death, Hunter performed one of his last live shows  at the Railway Hotel, with Mortar, performing the entire Fear and Loathing album.

Hunter chose to collaborate with documentary film-makers Periscope Pictures who followed his journey throughout. Entitled Hunter: For the Record, it recorded the final years of his life.  The documentary’s premiere screening was at the Australian Centre for the Moving Image (ACMI) in Melbourne on October 27, 2012, with a second screening in Perth on November 1, 2012.

At the time of his death, Hunter was working on a charity album in support of youth cancer organisation, CanTeen. The album, Australian Hip Hop Supports CanTeen, was released on 2 December 2011, and completed with the help of fellow SBX crew member, Dazastah. It includes songs by Bias B, Drapht, Downsyde, Hermitude, the Hilltop Hoods, Hunter and Koolism,

Since his death of on 20 October,  2011 at the age of 36, Hunter was posthumously inducted into W.A. Music Industry Awards Hall of Fame; and has been commemorated by an “AUS All Star” gig and an inaugural Australian rules match, named the Robert Hunter Cup.