A Crown, golden in show is but a wreath of thorns 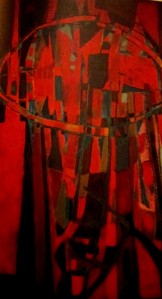 “The Crown of Thorns” (1950) oil on canvas;  163 x 98cm, concerns the Passion of Christ. It is one example of the artwork of non-figurative French painter, stained glass artist and tapestry designer, Alfred Manessier, who was born on 5th December 1911, in Saint-Ouen, Picardy in northern France. Whilst his grandfather was a talented stonemason; both his father and uncle had studied at the Abbeville Ecole des Beaux Arts.  Alfred Manessier enrolled in architecture in 1929, switching to art with Roger Bissiere at the Academie Ranson in 1935, just prior to his father’s death in 1936.

In 1937 at the Paris International Exposition, the French government appointed Sonia and Robert Delaunay to represent avant-garde art in Paris and the couple employed some 50 unemployed artists to help with this project. Manessier was one of these. The following year he married painter Therese Simonnet.

He was the victim of a car accident in Loiret on 28th July 1993, and died four days later, on 1st August at the Source hospital in Orléans. His funeral was held at the church of Saint-Sépulcre d’Abbeville and he was buried in the Cimetière de Saint-Ouen.

As part of the “new” Paris School and the Salon de Mai, “The Crown of Thorns” was exhibited at the Sacred Art, French Works of the 19th-20th Centuries, at the Musee National d’Art Moderne, Paris in 1950; and as a parallel comparison, John Milton once quoted:

“A Crown, golden in show is but a wreath of thorns.”