A Burg-meister in street art

Posted on August 3, 2014 by maryannadair 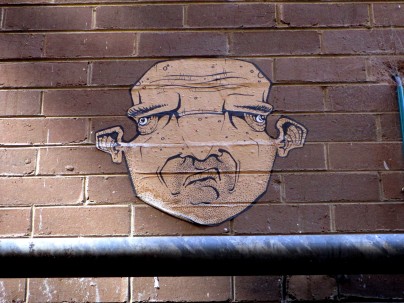 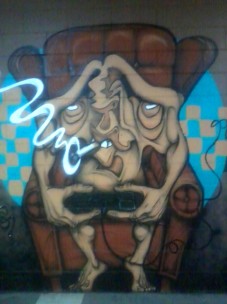 Burg is a street artist who is well-known around Melbourne and other places. After recent visits to the NSW coastal nirvana of Byron Bay, Burg has had some recent exhibits both there and back in Melbourne. An artist whose passion stemmed from his early life’s fascination with comics, animation and drawing, he believed that when he “grew up” he would become a cartoonist. He has come close to that by obtaining a Diploma of Illustration from the Northern Melbourne Institute of TAFE (NMIT).

Burg’s characteristically recognizable wrinkled man began with what he describes as a caricature that “went wrong.” This caricature focusses on rejection, imperfection and ugliness. Although most of his work is spray paint, his earlier endeavors were sketched on “wheaties“.  You can find out more about his art on this Facebook page.

This one is called “play outside” and is part of a commissioned work inside an arcade wall close to Elsternwick Station. Of course, “play outside” is exactly what this smoking play-station/screen addict should do!

However, I must add, that whilst walking through the arcade and quickly ‘snapping’ this with my ‘phone, I stopped and gave a ‘thumbs-up’ to the proverbial “little-old-lady” also walking through the arcade just in front of me. From the rear, I saw on her red jacket the word Liverpool and then I recognized the LFC scarf around her neck. I congratulated her on her choice of clothing and then she ‘bailed me up’ and told me that she was off to the local tattoo parlor to get another LFC tatt. She’s got the Liver Bird, the names of at least 8 top key players from Owen, Torres, and Gerrard. Although she could have chatted to me about her passion for hours, I had to dash.

Later on, I could not help myself from thinking, if I hadn’t had that brief conversation with her, I would never have found out the extent of her passion. It just goes to show that when you are an avid LFC supporter, wherever you are, you will know that: “you’ll never walk alone!”.