Compare the pair #11 – The New Wave of Street Art 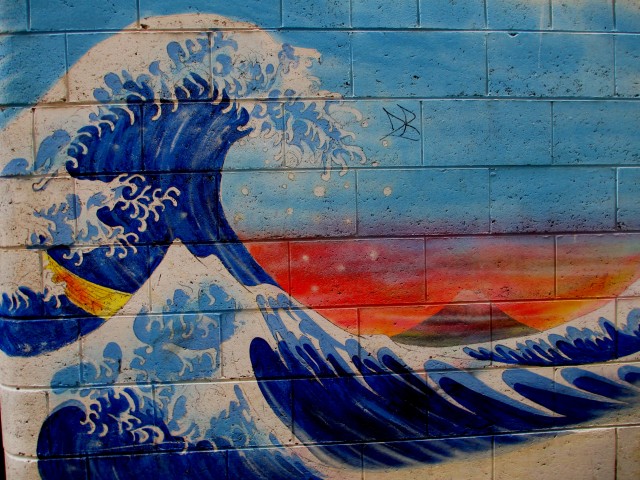 I saw this modern day replica of Katsushika Hokusai’s ‘Kangawa-oki Namiura’ or Raging Billows off Kanagawa at the rear of Melbourne’s famous Japanese Hanabishi Restaurant which has been owned by Akio Soga since 1988.  The depiction of the tsunami wave, with the deep blue and contrasting white foam in the waves accentuates a menacing beauty. Meanwhile, the serene Mount Fuji in the background reflects the beneficence of nature, which the Japanese venerate as deeply as they fear the anger of the nature’s more violent moods of the Tsunami.

About the artist: Born in 1760, Katsushika Hokusai was a Japanese ukiyo-e (wood-block print) artist from the Edo period. At the age of 12, he was sent by his father to work in a bookshop and lending library, where reading books were made from wood-cut blocks. Two years later, he became an apprentice to a wood-carver, whom he worked for until the age of 18. He was later accepted into the studio of artist, Katsukawa Shunshō.

Upon the death of Shunshō in 1793, Hokusai began exploring other styles of art, including European styles. It was during this time that he became focused on landscapes and images of the daily life of Japanese people from a variety of social levels. This change of subject was a breakthrough in ukiyo-e and in Hokusai’s career. This work is part of his ‘Thirty-Six Views of Mount Fuji’  (aka Fugaku Sanjūroku-kei?) which includes the internationally recognized great wave off Kanagawa.May10 celebrates the 165th anniversary of his death in 1849.

So, in comparison with the original and the street art copy, there is a lot of similarity as well as some irregularity, which reminds me of another local Melbournian phrase I have learned “Not drowning, waving“  which has nothing to do with the nature of this painting, but has everything to do with the name of a pub band  formed in 1983 which I would prefer to reverse: ‘Not waving’ (and hopefully not…drowning).