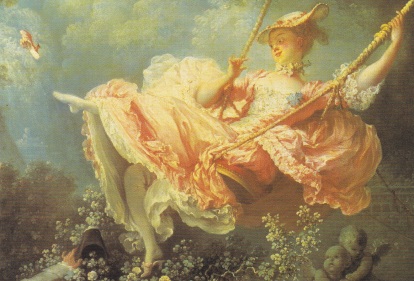 I can’t help it, I have to honour it. I just love this painting and would you believe? It is Fragonard’s 281st birthday! Vive Fragonard!

Jean-Honoré Fragonard (born 5 April 1732 – died 22 August 1806) was a French painter and print-maker from the Rococo school of art. He produced more than 550 paintings of which only five are dated. According to Wikipedia, he was born at Grasse, Alpes-Maritimes, the son of François Fragonard and Françoise Petit.

Fragonard gained the Prix de Rome in 1752 with a painting of “Jeroboam Sacrificing to the Golden Calf.”  My most favourite painting of his is:

The Swing, which can be seen at the Wallace Collection in London.  The painting depicts a young man hidden in the bushes, watching a woman on a swing, being pushed by her elderly husband, almost hidden in the shadows, and unaware of the lover. As the lady goes high on the swing, she lets the young man take a furtive peep under her dress, all while flicking her own shoe off in the direction of a Cupid and turning her back to two angelic cherubim on the side of her husband. According to Wikipedia, the lady is wearing a Bergère hat (shepherdess hat) which is ironic since shepherds are normally associated with virtue because of their living close to nature, uncorrupted by the temptations of the city.

Want to own it? well, interestingly, there are a number of copies available but I must worn you, none of them are by Fragonard.

This entry was posted in OilPainting, Paintings and tagged #Fragonard, #WallaceCollection, Jean-Honore Fragonard, Paintings, The Swing. Bookmark the permalink.