Posted on September 12, 2018 by maryannadair 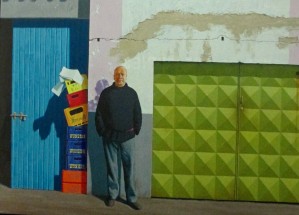 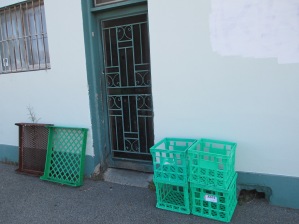 Having always enjoyed this work by Smart, I was reminded of it whilst walking past the back-door of a local milk bar. Likewise, when I saw this ‘Random Acts of Gentle Anarchy‘ in Hosier Lane some time ago.

Jeff Smart (Full name: Frank Jeffrey Edson Smart), was born in Adelaide on 26 July 1921. An expatriate Australian painter, he is known for his precisionist depictions of urban landscapes that are ‘full of private jokes and playful allusions’. Self-Portrait at Papini’s was partly based on a photo of the artist standing in front of Papini’s workshop in Pieve a Presciano, in Tuscany. Papini was the owner of the petrol service station. Smart lived in Tuscany for 40 years until his death from renal failure in Arezzo, on 20 June 2013, aged 91.