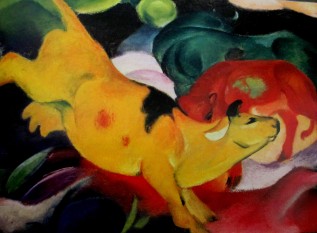 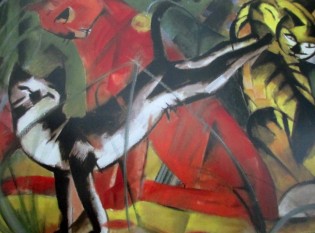 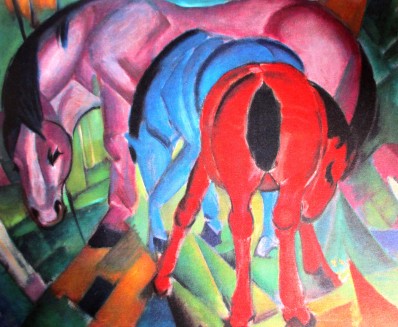 All eight images above were painted over a three year period and form a part of a menagerie of animal artworks from cows, cats, horses, a fox, a little blue horse, a monkey, a dog lying in the snow and a set of stables. All of these works were painted in bright primary colours under the artist’s influence of fellow modern artists involved in cubism and futurism. The colour blue was used to portray masculinity and spirituality; yellow represented feminine joy; and red encased the sound of violence.

The artist – Munich-born painter and print-maker Franz Marc (February 8, 1880 – March 4, 1916) one of the key figures of the German Expressionist art movement.

During the ‘Great War’ Marc enlisted in the German Army first as a cavalryman and later as a war artist using military camouflage to paint canvas covers to hide artillery from aerial observation. His career was cut short when he was struck in the head and killed instantly at the age of 36, by a shell splinter during the Battle of Verdun on 4th March, 1916.

Thankfully those years are over and art lovers can once again appreciate the art of the great Franz Marc.