Galatea – For She is the One with the Milk White Skin

Galatea (Trans: “She who is milk-white“) is a name popularly applied to the statue carved of ivory by Pygmalion of Cyprus, which then came to life in Greek mythology. Galatea is also the name of Polyphemus’ object of desire in Theocritus’s Idylls VI and XI and is linked with Polyphemus again in the myth of Acis and Galatea in Ovid’s Metamorphoses.

French Symbolist painter Gustave Moreau was born on 6 April 1826 in Paris, to a middle class family living at 6 Rue des Saints-Peres. Having encountered an early sheltered life, by the age of 15, he began his love for art.

By the age of 18, he began art studies at the Ecole des Beaux-Arts under the guidance of François-Édouard Picot until 1850. He then moved to a new mentor Théodore Chassériau, whose work strongly influenced his own. Moreau showed his first works in 1852. 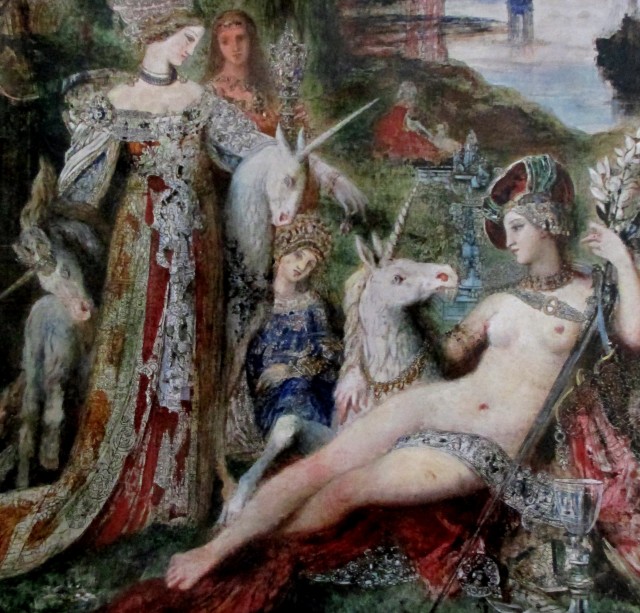 He was a major figure in the illustration of biblical and mythological figures. His first painting was a Pietà which is now located in the cathedral at Angoulême. He showed A Scene from the Song of Songs and The Death of Darius in the Salon of 1853. In 1853, he contributed Athenians with the Minotaur and Moses Putting Off his Sandals within Sight of the Promised Land to the Great Exhibition.

Moreau had a 25-year personal (and possibly romantic) relationship, with Adelaide-Alexandrine Dureux; a woman whom he drew several times. On March 28, 1890, Dureux died. Her death affected Moreau greatly, and his work after this point contained a more melancholic edge.

Moreau died of stomach cancer on 18 April 1898 and was buried at the Cimetière de Montmartre in Paris in his parent’s tomb. Dureux is also buried at the same cemetery.

Gustave Moreau and the Eternal Feminine Exhibition was held at NGV International Jan-Apr 2011.